In December, we announced the ENF would match up to $100,000 in donations to the Elks Pearl Harbor Campaign received by December 31. We’re excited to report that the 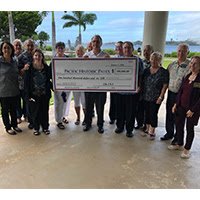 Elks easily maxed out our match for the USS Arizona Memorial at Pearl Harbor; with our match, the Elks have now raised nearly $280,000 for the campaign. National President Bob Duitsman presented the initial installment of campaign funds in early January while in Hawaii for a state visit.

The Elks Pearl Harbor Campaign ends on June 1. You can keep up with the campaign’s progress, see if your state is close to reaching the dollar-per-member giving goal, and access the FAQ here.

This entry was posted in history, humanitarian, Lodge, veterans. Bookmark the permalink.