During the winter of 1947-1948 around 100 lodge members participated in regularly scheduled bowling leagues at the old Elks Temple.

On April 20th a little over 60 of them gathered to celebrate the season, pass out awards and elect officers for the next season.  The “lady Elks” had their banquet on the 19th. 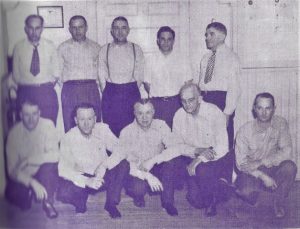 In a special home-and-home match, April 17th in Missoula and April 24th in Moscow, a Moscow team of Elks defeated a team representing Missoula Elks Lodge #383 by a 3 pin margin over 6 games.  The Moscow team was comprised of (kneeling from left to right) Aaring, Nelson, Shaw, Hahner and Kaiser.

This entry was posted in bar/dining, history, Lodge. Bookmark the permalink.