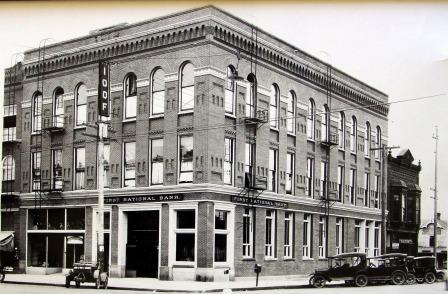 Thirty-two charter members were initiated as follows:  (parenthetical notes added for this publication)

M. Chambers and W. V. Windus of Pullman, and Frank White, of Moscow, were the ﬁrst candidates initiated after the lodge was chartered.

In the carefree and gay nineties, the hardy pioneers of the Palouse country took their fraternal and athletic events very seriously. For example, when the Idaho and Washington State College football or baseball teams met in friendly rivalry, a riot usually took place before the game ended.

Also, with a lack of modern conveniences, such as the auto, radio, movie, ’phone and good roads, the people had to content themselves with local dances, box festivals, church revivals and lodge “meetins’.” Every small town had its Odd Fellows’ Hall or Masonic building, and other organizations were active.  Initiations were rough in those days, and a maximum of horseplay prevailed.

Restricting the jurisdiction of an Elk Lodge, this drawing from a larger area, helped this Order to become strong in the town where it was located.  Another thing, its very ﬁrst tenets preached the doctrine of enjoying the present life instead of waiting until one reached heaven to be happy.   Based  on patriotism with religious arguments strictly taboo, the Order was able to draw men from all walks of life for their mutual enjoyment and good fellowship.

As above stated, the first home of 249 was in the third floor of the First National Bank.  An elevator shaft had been left unfinished, so that in some future day a modern elevator might be installed.

One old timer recalls the night he was brought to the lodge for initiation by two good friends.  After the preliminaries had been completed, these friends slipped him in the elevator shaft on the first floor, and told him to hide there and thus avoid the rough stuff that would come later.  They locked the door, and he settled down on his chair thankful for such loyal and true friends.

While he was thus meditating on the nobility of man in general, footsteps approached the shaft, and one voice exclaimed:

“I can’t find the dustpan; guess I’ll have to sweep this stuff down here,” and, to the horror of our candidate, he felt a shower of particles dropping on his head and shoulders.

While he was still flicking the dust off his clothes and hair another voice upstairs called out to someone on the same floor: “Blamed if I’m goin’ to carry this junk any further; I’ll just dump these bones and potato skins down here.”  Another shower of miscellaneous articles glanced off his crouching body.  By this time our candidate was running a high temperature, and was almost apoplectic with rage.  He tried to tear down the door, but it was a well made structure and withstood all is efforts, both of a physical and vocal nature.

inally, the door was unlocked, and the initiating committee waltzed him upstairs, where he was given the works, with his two trusted friends leading the pack.  However, when the ceremony was over, he laughed with everyone else, and made it a point to be at succeeding “meetins”” to help out on other luckless candidates.