On November 15th, in 1919, the first issue of the 249er was published.  Currently in its 100th year of continuous publication, the 249er has been published monthly, with the exception of a few years during the great depression where the lodge could only afford quarterly production.  For the first 30 years it was edited by Dr. E. T. (Doc) Baker assisted by Guy Wolfe.

In its November issue from 1919, here is how “Doc” Baker introduced the new publication – 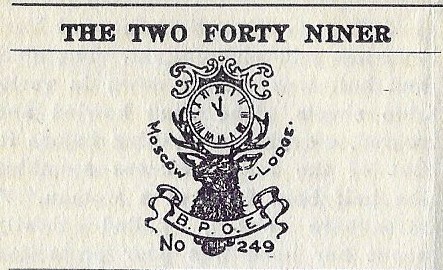 The Two Forty-Niner makes its initial bow.  It will be the endeavor to keep this little publication just as newsy as our members care to make it.

When you change your address, get married, or any other accident befalls you: when you become sick, or any item of interest occurs to you, let us know, and when you finally joint the caravan which moves to that mysterious realm, we will write your faults on the sands, and your virtues on the tablets of memory!

In its November issue from 1949, here is how “Doc” Baker summed up his thirty years.

END OF AN EDITORIAL TRAIL

In the fall of 1919, Judge Steele, then Exalted Ruler, appointed the writer as editor, and the late Guy W. Wolfe, as associate editor, of a new lodge bulletin.  Both of us happened to be reformed newspaper men, and Guy was the founder of the University of Idaho’s “Argonaut.”

When we asked the Judge what would be a suitable name for the new venture he replied:

“Its your baby; name it”

And that is how the Two Forty Niner came into being, with the first number appearing November 1, 1919.

During the past thirty years, the writer has carried on, with the capable association of Guy Wolfe, Laurence Huff, Alvin Hofmann and Al Barakman.

Our chief aim in editing this little bulletin has been to keep our members, both local and distant, acquainted with lodge doings.  This was particularly important during the war, and we hope our boys, then scattered all over the world enjoyed the Two Forty-Niner when it reached them.

During those three decades we have seen our membership grow from 350 to over 1,800.  Also, the Temple has grown from a small building to its present spacious size.

Through these passing years we have chronicled the “Vacant Chair”of over 370 members or, approximately one a month.

We wish to thank the Lodge for presenting us with a beautiful diamond emblem ring, and a Webster’s unabridged dictionary.

We have enjoyed our work, and appreciate the cooperation of the officers at all times.  Clyde Marsh, secretary for years, and, later, Kelly Cline, have been particularly helpful.

And so, on this, our thirtieth anniversary, we step down and out with no other reason than we think we have served long enough.

We wish to retire before we become as antiquated as the old gentleman attending funeral services in Howard Short’s chapel.  At the conclusion when the old man started tottering towards the door, Howard took him gently by the arm, and said:

“Grandpa, you better stay here; it won’t pay you to go home.”

With these solemn words, we leave the Two Forty-Niner in capable hands, and, with best wishes for its future, we remain,

In honor of the 249er’s 100 year history we will be featuring some past insights and observations from those 100 years on this site in the next several months.