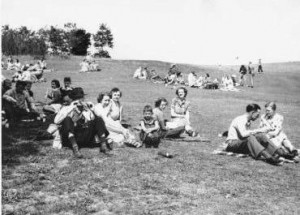 The exhibition was a culminating activity following the community picnic, and it was hoped the exposure of the non-member public to the course could increase membership.  Pari-mutuel betting on the results was a part of the program and the golf course garnered significant revenue from the proceeds.  Attendance has ranged from a few hundred spectators to several thousand.

Originally players were chosen in a series of qualifying events during the spring, but early on the field became set by the lowest handicapped individuals available.  Several years after the advent of the Moscow Elks Invitational tournament, qualifying became tied to the event.  For most of this period  the top three finishers from the previous year and the current club champion were always exempt from qualifying.